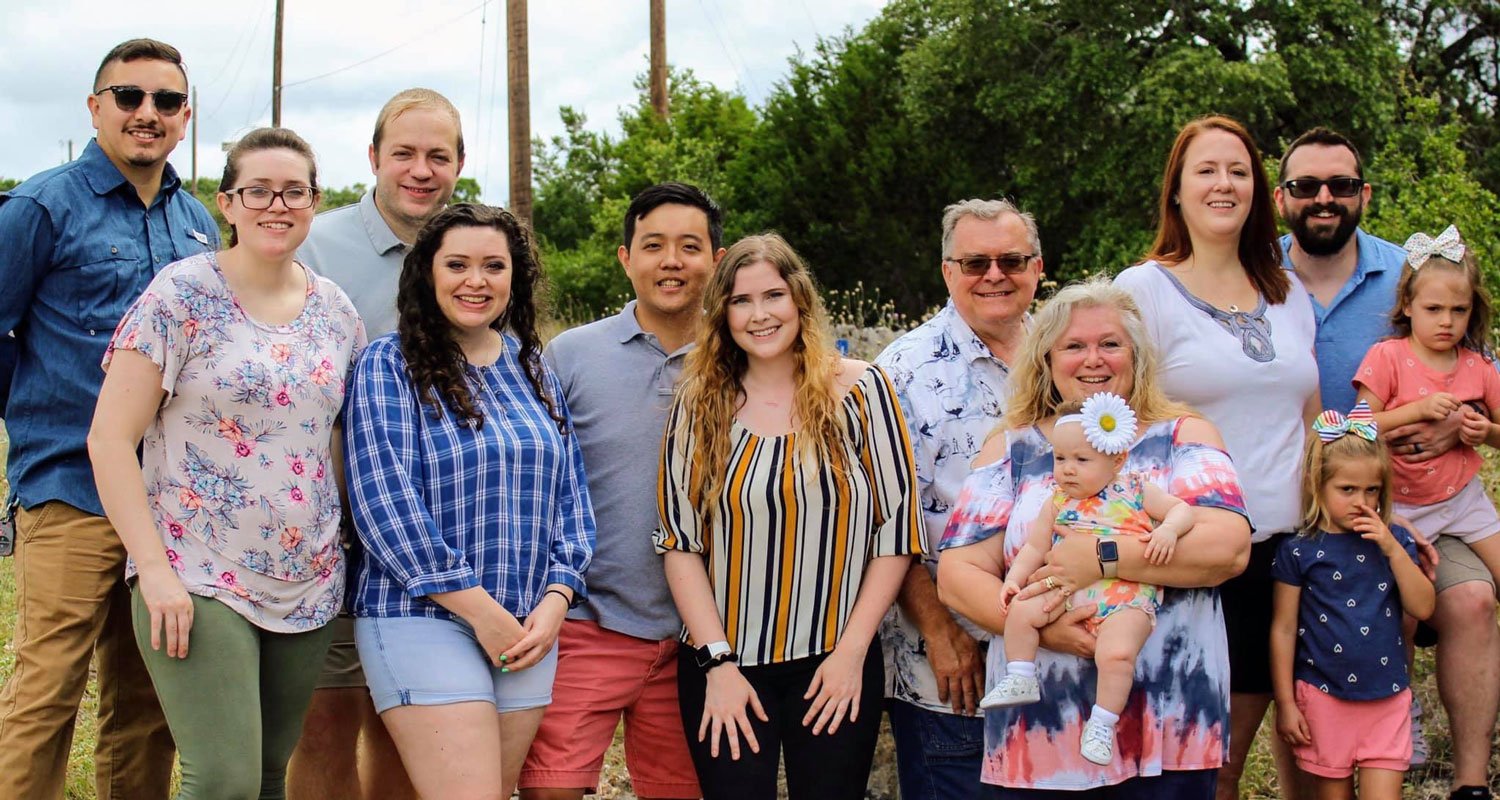 Book Now
David and Dawn have owned and operated the Woodrow House since 1995. When they began, Chase was seven, Paige was 2 1/2, and Courtney was around 15 months old. Savanna was born 15 months after they opened.

David and Dawn are in their 25th year running the B&B. They still love it and love meeting all the guests, making new friends, and visiting and catching up with the return guests.

David is continuing to do Commercial Real Estate and manage the businesses his investors have invested in. David is officially in the viticulture business. He has about 1200 grapevines in several small vineyards around Lubbock. David and Dawn have just started making their own wine and hope to be able to expand that part very soon.

Dawn is still a Wedding Planner and Innkeeper. Her favorite new job is being a grandmother, or “Honey” as her grandchildren call her. David is “Sugs”. That is short for Sugar.

David and Dawn have been married for 35 years. They got married on Dawn’s Birthday, so David only has to remember one date!
Their oldest, Chase has been married to Stephanie for 12 years. They have twin girls that are 4 years old. Chase has an associate degree in Applied Science and Steph has a bachelor’s degree in Nursing. Chase works in the IT department at Meadow ISD and Steph is the School Nurse for Meadow ISD. They live in Meadow Texas, just outside of Lubbock. Chase and Steph are 32 years old.

The twins are Ellie and Ainsley. They are in Pre-K at the same school that Steph is the School Nurse at. 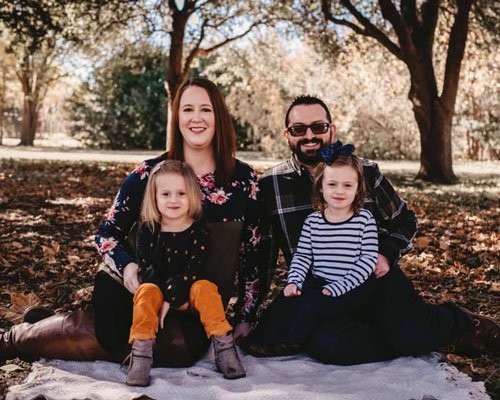 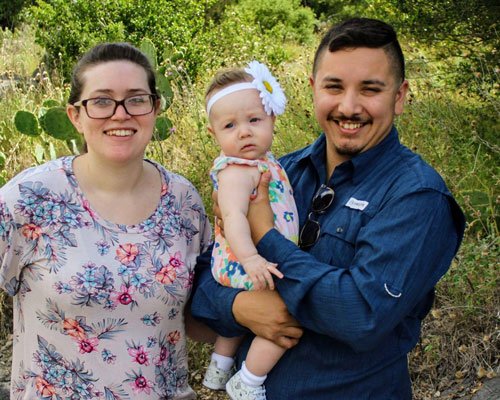 Paige is the next oldest. She is 28 years old. She is an Elementary Music Teacher at two schools in Edinburg, Texas and a wedding planner for a wedding venue there. She Married Randy Sifuentes in 2017. Randy is a High School Band Director and a Realtor. Paige graduated from A&M-Commerce with a degree in Music Education. Randy got his Music Education degree from Middle Tennessee State University. They both are percussionists. They have a daughter, Olivia who is 7 months old.
Courtney is the middle girl. She is 26 and is a Criminal Defense Attorney. She got her bachelor’s degree in Political Science at A&M-Commerce. She graduated from St. Mary’s Law School with honors and partnered up with another attorney and they started her own firm, Krause & Dailey in San Antonio. Her and her husband, Jackson, got married in 2016 and they live in San Antonio Texas. Jackson is a Realtor there in San Antonio. Jackson got his bachelor’s degree in History and Computer Science at A&M-Commerce and his master’s degree in history at UT-San Antonio. 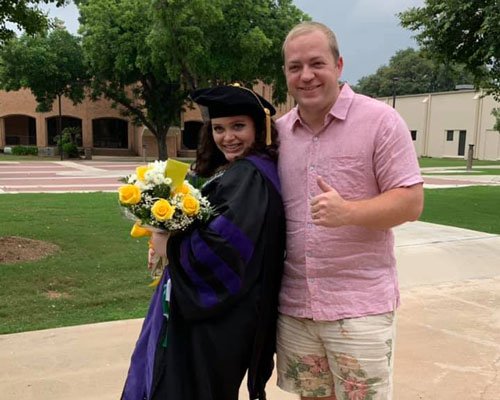 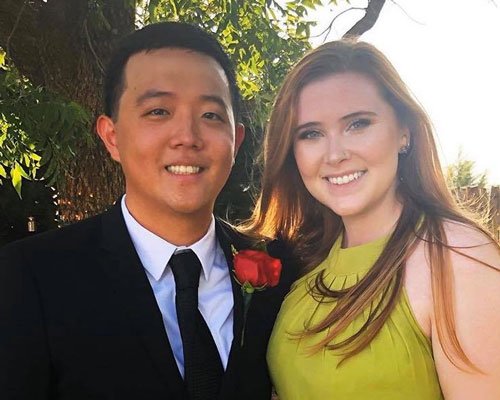 Currently, they are empty nesters. Savanna is 19 and is a student at Texas Tech University. She is studying Communication Studies.  Courtney is 21 and just graduated from Texas A&M in Commerce, Texas. She has a degree in Political Science and is currently looking for a Law School to attend.

Paige is 23 and is a teacher at a High School in Nashville Tennessee.  She teaches Percussion and Piano.

Chase is 27 and is married to Stephanie.  They have been married since 2008. Stephanie is a nurse and Chase is a Computer Technician for TTU.

David is the cook at the Bed and Breakfast and also has his own company called Fleming Investment Properties. He sells, leases and manages commercial properties. He also puts together Investment Groups. David does stained glass and did all the stained glass that you see throughout the Bed and Breakfast. He also enjoys hanging out in his man cave watching sports. Dawn is the Innkeeper. She runs the Inn while David is at his office.

Dawn enjoys taking care of the guests.  She enjoys playing the harp, although finds it hard to find time to sit down and practice. They attend St. Luke’s Methodist Church.

They enjoy meeting new people and have cherished the friendships they have been blessed with over the years while running the Woodrow House B&B.

David and Dawn have been running the Inn for 19 1/2 years.  David still has his Real Estate Business, so  he gets breakfast ready on the weekdays and heads to the office.  Weekends David and Dawn cook a scrumptious full breakfast together.

David and Dawn are also on the Board for the Texas Bed and Breakfast Association, so they travel every other month for board meetings.  They are enjoying this empty nesting phase of their lives.

Chase is still attending Texas Tech University, majoring in Management Information Systems.  He is also working full time in the IT Department at TTU.

Chase's wife, Stephanie is working full time  as a nurse in CICU at UMC.

Paige is living in Murfreesboro Tennessee working as a substitute teacher, teaches percussion lessons to middle school students and plays drum set on the weekends for musicals in the area.


Courtney is attending Texas A&M University in Commerce, Texas.  She is majoring in Political Science with a minor in Sociology.  She is a member of the Kappa Delta Sorority and works part time on campus as the Panhellenic Council President for the University.  After she graduates she plans on attending Law School, hopefully at Texas Tech University.

Savanna attends West Texas A&M University in Canyon, Texas.  She is studying Broadcast Journalism and is a member of the Chi Omega Sorority.

Marie is also pictured in this picture.  She was our foreign exchange student from Germany.  This picture was taken in Cabo San Lucas, Mexico in August of 2013. 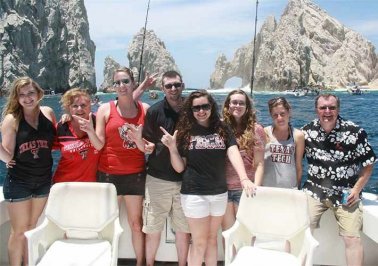 Savanna is 17 and is a Senior at Lubbock High.  She is an International Baccalaureate  Student.  She competes on the LHS Gymnastics team, plays snare and is the Drum Captain for the Lubbock High Drum line.  She has applied to several Universities and will visit campuses in the spring.

Courtney is 19 and in her second year at Texas A&M in Commerce Texas.  She is technically a Junior since she started college with 24 college credit Hours.  She is double majoring in Spanish and Political Science.  She is also a leader in her sorority, Kappa Delta.

Paige is 21 and in her 4th year at Texas A&M in Commerce.  She will graduate May of 2014 with a degree in Music Education.  She will pursue a career in Education, hopefully working in an Elementary School.  She hopes to soon work on a Master's Degree in Music Therapy.

Chase will turn 26 in January.  He is out of the Navy and is attending Texas Tech.  He is working on a Management Information Systems Degree.  He is also working part time at Texas Tech in the IT department.  He is technical support for all the resident halls.

Stephanie and Chase have been married for 5 years.  Stephanie is a nurse at the University Medical Center.  She works nights in the CICU.

Currently, they are down to one daughter still at home. Savanna is 16 and is a Junior at Lubbock High School. She is a International Baccalaurate student and plays snare on the drum line. Courtney is 18 and just started at Texas A&M in Commerce, Texas. She is on an academic scholarship there. She is double majoring in Spanish and Political Science. She hopes to someday work for the State Department or Foreign Service.

Paige is 20 and also attends Texas A&M in Commerce. She is on a Music and Academic scholarship there. Paige is a Junior majoring in Music Education and will be certified at all levels. She is also a percussionist. Paige wants to be a drum line instructor or a music teacher.

Chase is 24 and is married to Stephanie and is in the Navy. They have been married for four years. Stephanie is here in Lubbock working at Covenant Hospital as a nurse.